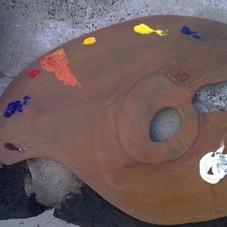 I employ what is referred to as the 'primary' palette because it's limited to red, blue, yellow and the modifier - white.

You may notice a consistent harmony of color throughout my work - this is because the primary palette forces one to blend secondary's, tertiary's and beyond (browns, umbers) always from the seven 'root' pigments.

White comes in two basic forms - a pastie, opaque (usually labeled 'titanium') and the more transparent 'zinc'. Many artists prefer the opaque version because it more readily covers what one applies it over but I sacrifice this power for the luminosity of zinc white seems to better energize the colors it's blended with. 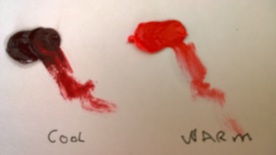 The reds I employ are the cool Alizarin and the warm Cadmium.

For me, the chief interest in painting is to mimic the third dimension on a two dimensional surface. To help accomplish this I use 'temperature' - the the fact that warm tones appear to come forward whereas cool tones move back into distance. Red tends toward the middle of this temperature spectrum.


I divide a canvas conceptually into three equal horizontal bands and then apply red, generally, to the middle band, blue, generally again, to the top and yellow to the bottom, foreground band. 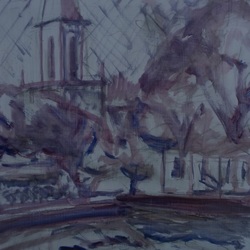 This has immediate practical application in my oil sketch or 'block-in' which I execute using a mixture of warm blue and warm red. The resulting purple 'scaffolding' will hold a middle position due to its blend of warm-coolness. From this 'base of operations' I come forward by applying yellowish warm tones in the foreground and move into distance with cool bluish tones.

My palette's yellows are the cool Lemon and Cadmium, the warm.

Taking green as an example secondary - it's produced from mixtures of yellows and blues. Because the primary palette limits one to two hues of each color, only four possible base greens hues result: 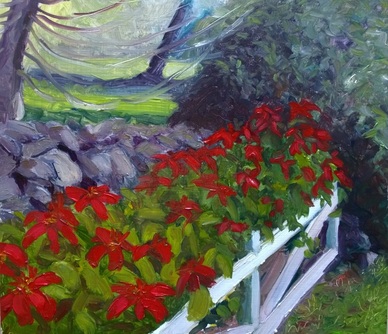 Each of these mixtures result in a different temperature and thus a 'best placement' somewhere between foreground and background. It's this judicious placement on the canvas that's a major element in the challenge of painting the third dimension successfully.

This Poinsettia scene describes the case in point.

The greens above the stone wall depicting the lawn areas of the subsequent property are painted from a mixture of cool blue and cool yellow. The resulting temperature is cooler then the foreground plant leaves painted from a mix of warm blue and cool yellow. The background lawn, in relation to the foreground greens, would not hold its more distant position if the green hue was warmer. 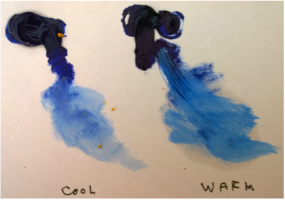 My blues are the cool Ultramarine and the warm Phtalo. 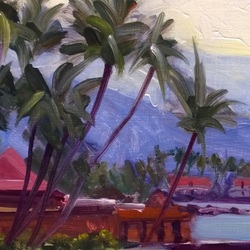 In my conceptual division of the canvas into three horizontal bands (discussed above) I almost never allow the warm blue into the top or background band. The cool blue, Ultramarine, softened with varying degrees of white can depict great distance. Case in point is this view looking south from Kailua Bay. Below sky is the very distant Mauna Loa west slope and, below that and much closer, Hualalai's western slope. Both of these color bands are mixed from cool blue. In contrast, the bit of Pacific in the foreground is mixed using the warm blue, Phtalo.

the  Anatomy of color

The primary palette is not popular because 'with great power comes great responsibility'!

The responsibility is that every hue must be created from blending - no shortcuts. A scene to be captured almost never calls for direct application of a pure blue, red or yellow, one must 'construct' the hue that has the correct value and the correct temperature.

The power is that this ever-increasing experience mixing hues allows one to replicate whatever the eye views with velocity. Intimate awareness of the anatomy of color can't be attained from application of ready-made factory secondary's and tertiaries.
Accuracy and speed of color reproduction slows down fleeting nature enough to be caught - the plein air painters mission.

Mix not upon the palette!

It's hard to stop myself, let alone lecture about not mixing pigments upon the palette but I can say for sure: a hue on the canvas that's been mixed there, on that canvas, is more vibrant than one pre-mixed upon the pallet and then transferred. This principle is hard to adopt - there's a strong tendency to mix on the palette until a semblance of the value and temperature one seeks appears. But the freshness and subtle variety of hue produced by directly running pigment into pigment on the painting surface is unsurpassed.

The magic of compliments

To effectively mix hues upon the canvas, the knowledge that blue's compliment is orange, red's compliment is green and yellow's is purple, must become automatic. A close second to this is the principle: It's easier to cool a warm than it is to warm a cool hue. We'll discuss temperature first and then the mixing of commentaries.
Temperature 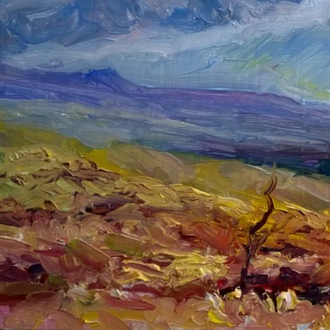 With the primary palette this principle becomes a major consideration, for, one is mixing pigment into the canvas which changes temperature at practically each stroke. Success isn't a simple matter of restricting blues to background and yellows to foreground - degrees of blues are needed for foreground work and degrees of yellows in background work.


In this detail you can observe yellow in the sky - background-right. This painting depicts an afternoon looking south so the sun is descending to the right, lighting the sky with increasing warmth as it penetrates through more and more dusty atmosphere. Yellow is required but it must be a cool yellow or it won't stay back - a warm yellow would, to the eye, come forward and destroy the illusion of the third dimension.
Warms First 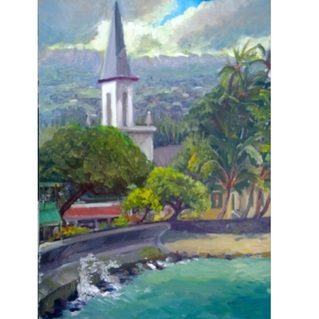 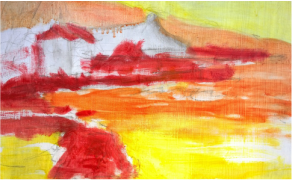 We've discussed  the basics of the  'primary' approach to painting first in terms of temperature. But the trick of fabricating distance is also in the juxtaposition of values - degree of darkness - and the powerful fact is that a primary hue's temperature and value is readily modified by addition of its compliment.

We've laid down primaries and the secondary orange - warms first - but, alone they will not give a satisfactory depiction of the scene we're attempting to capture. The three-dimensional reality of the thing is, for myself at least, the challenge and the joy of painting. 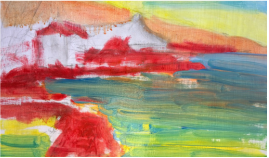 Here, complimentary blue is laid down over the middle-ground orange which grays and reduces the blue's intensity. This creates the illusion of distance in comparison with the foreground blue, mixing with yellow, resulting in a warmer, richer and, to the eye, foreground ocean.

The light, cool blue added to the sky throws it back in comparison with the darker blue mixes laid with descriptive brushstrokes over the ocean surface.
Here color value is also starting to speak, saying: "the sky is luminous and distant because it's  the brightest, most transparent area in this scene".

Complimentary blue is now worked over the orange Hualalai western slope, graying and thus throwing it back into its proper background position. Darker blue with added red just in front of the mountain describes coast line as being more proximate. The mid-ground sea wall is even darker than the coast line so the eye reads it as being closer than the coastline - well in front of the mountain slope.
Temperature is at work with warm reds and even warmer yellows established almost exclusively in middle and foreground areas. 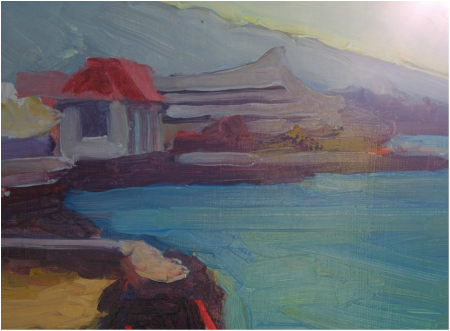 Temperature at work is further warming sand, and, the foreground ocean warming towards green with the addition of the pallet's warm yellow hue.

You do see warm yellow in the distant sky, necessary to record the truth of sun spilling over the mountain as it rise from the left but, relative to the foreground yellows, it's cool yellow. Principles are necessary knowledge but understanding comes from relativity in use, never principles alone. 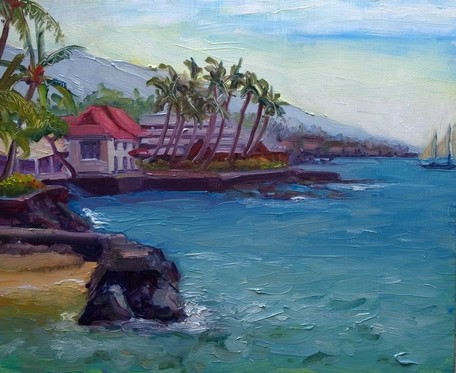